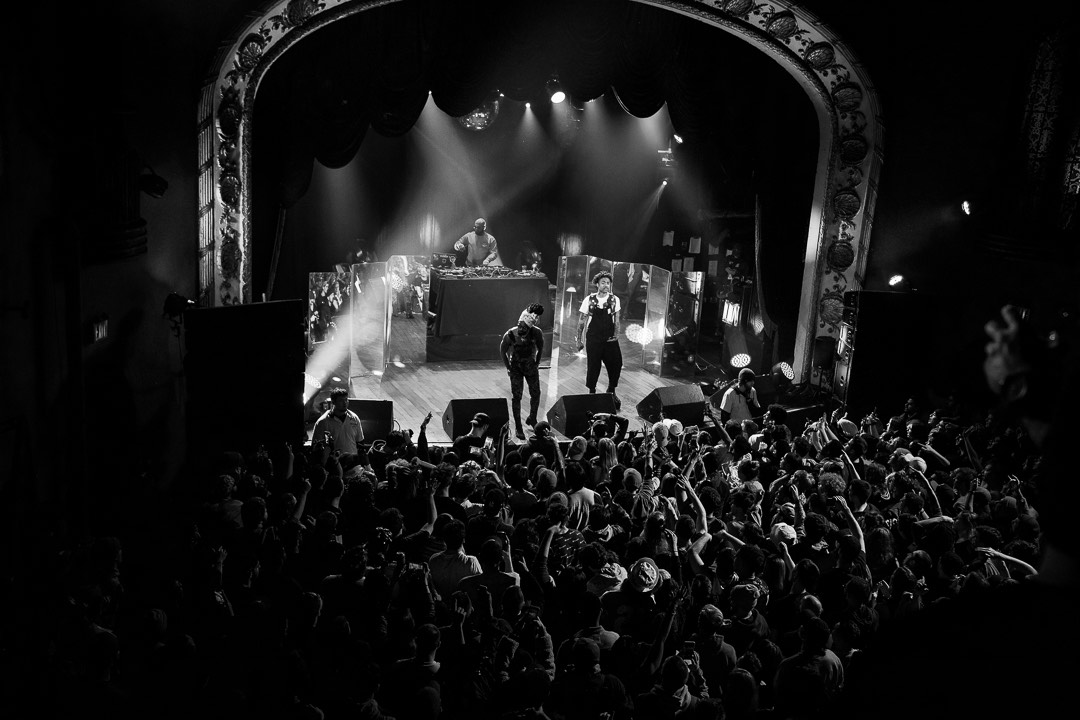 On a stormy Sunday, Atlanta’s own hip hop group EarthGang welcomed their first-ever sold out tour to Toronto’s Opera House. Fittingly, EarthGang opened up their Welcome to the Mirrorland Tour the same way they started off their Mirrorrland album – with “La La Challenge” and a whole lot of energy. Stepping on a stage with just a DJ and 2 mirrors facing the audience, the Dreamville duo proved that they did not need any other added theatrics to put on a show and commanded the sold-out venue from the moment they graced the stage.

Earthgang member Doctur Dot came out in fashionable black overalls, complemented by a white t-shirt and and a leather vest. Jonny Venus entered the stage with a white bandana and and a white jacket on, before finally letting the dreads loose and showing of his colourful overalls. Before continuing the show the Atlanta duo made sure to shout out their tour DJ Dark Knight, hype the audience up with various chants, and splash a bottle of water to finally break into their song “Top Down.” Singing along to each others verses on stage, you could tell the 2 creatives are passionate about each other’s lyrics and the messaging.

“This right here is for all the bullshit, all the racism, all the sexism, all the fuck boys and fuck girls, all the egos,” yelled Earthgang’s Johnny Venus while getting the audience to to put their middle fingers up – taking a political stance similar to YG and Nipsey Hussle’s “FDT” before getting into their own song, “Missed Calls.”

EarthGang brought numorous members of the multi-cultural crowd on stage to dance as a group and to prove that they, as well as the city of Toronto, had rhythm.

“Every time we come through them borders man, they be giving us trouble man, but when we come here and fuck with y’all, the people of Canada man, it ain’t nothing but love. The border sucks, but y’all are amazing,” the 2 members explained as they introduced their song “Monday” with the late Mac Miller. After performing the song, the MCs took a moment of silence to honour the many legends we have recently lost including: Mac Miller, Nipsey Hussle, Kobe Bryant and his daughter Gigi.

After leaving the stage the sold-out crowd screamed for an encore, forcing the duo to come back out on stage and perform. The duo left the crowd and closed the show with a message of unity, “I am EarthGang, you are EarthGang, we are all EarthGang.”