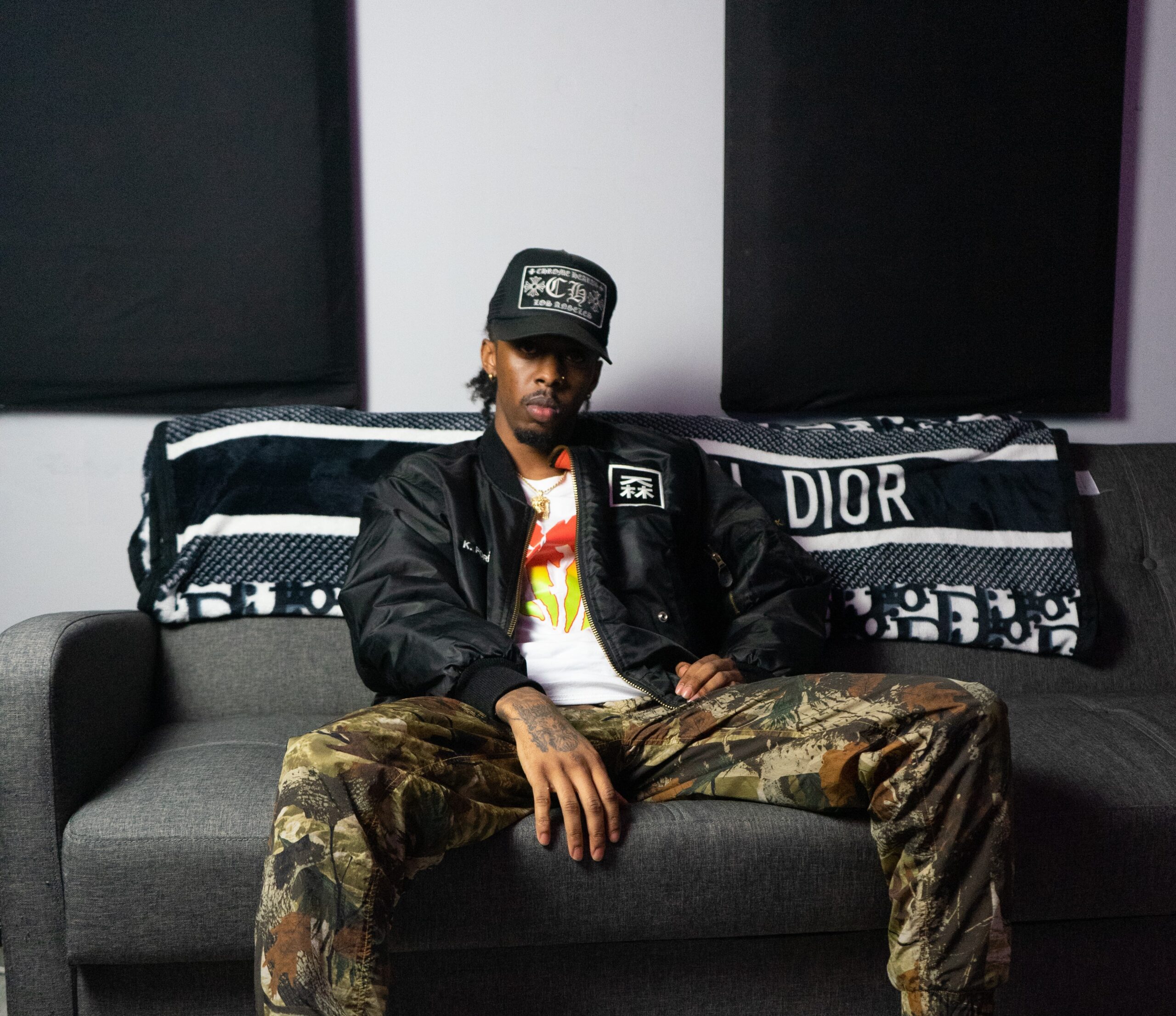 May. 30, 2021 By Jermaine Johnson
FeaturesInterviews

K. Forest Welcomes You To The Wildfire

After releasing his latest project Welcome to the Wildfire, it is no secret that R&B protégé K. Forest is a master at his craft. The singer is seen perusing around the studio, while adding the final pieces to a record that his frequent collaborators dF and Shabazz are working on. He assists by adding melodies to the beat that enhances the soul, incorporates samples that elevate the texture or layers of the song, and pulls up reference songs that show how far the record can be pushed. It’s these finishing touches that help take an already good song into a noteworthy listening experience. And it’s this supreme attention to detail which caught the attention of Travis Scott in 2015, and led the music star to produce his own cover of Forest’s original song “Guidance.”

K. Forest’s sound has developed a lot over the years into something that he describes as intricate, vulnerable and intentional. While intentionally listening to his music, you start to notice the major delicacies in his rhyming schemes and melodies such as his sharp storytelling, a skill that is natural to him. However, it’s also something that he continuously tries to sharpen. “Practice and repetition,” he explains, “Putting in the hours to get better. Also, life experience. I think that’s the most important thing when it comes to songwriting. I can’t write unless I have an interesting life or if I’m doing something or if I’m a part of something. So it’s always constantly putting myself in maybe a crazy situation.”

Forest says that he’s here to write about life and explains that he started making music around the age of 13, motivated by a family rich with musicians. His uncles were in a rap group, and his cousin C-NO was a producer, singer, and songwriter himself. It was C-NO, he explains, who would teach K. Forest how to make beats while he was living out in England. But The Summer We Never Had singer credits his father for where his true love of music came from. He explains, “My pops got like over a thousand vinyls. This dude got Sam Cooke, Donna Summer, Gregory Isaac, Marvin Gaye. So that’s where sort of my love came from. I just be going through these vinyls, just flipping through them, finding gems and stuff.”

K. Forest has been championing and glorifying his artistic independence for the last 6 years, even going as far as to say that being independent and staying an independent artist is what he is most proud of. “I feel like ownership is important, especially in a time where I think it’s important for an artist to understand the business. I just feel like it’s important to own. For me, I think that it’s like your baby. I don’t want to just pass my baby off to somebody. I wouldn’t pass my child off to somebody random. I know how to take care of my child. I know what it needs. I know how it wants to be nurtured so I can’t give that responsibility to anybody.”

Uncertain of what the future holds and if he will ever give up his independence, for the time being K. Forest seems to be sticking to his guns. “At the moment, right now, I think that this is like artist liberation. So I don’t see why we would want to give that up. I mean if it’s grown and it’s ready to experience the world and a different light or something then maybe. For now I think I’m just staying independent man. I like it over here. It’s great. I like freedom.”

On his Forest Fire II album that came out in early 2018, the project starts out with a clip from Joe Budden’s podcast where he calls the R&B singer “PartyDownstairs.” The previous Budden Podcast hosts Joe, Mal and Rory have played Forest’s music on their podcast and have expressed a liken to him before and after this particular outburst. Reflecting on the situation, K. Forest feels like he said everything that needed to be said on the record. “It was more of a statement, I think it’s one of those things that I’ve heard, and needed to be said, and needed to be projected through my music instead of verbally. You know – exhibiting the difference and my artistry and what I have to offer. I think all those artists he named (PARTYNEXTDOOR, Bryson Tiller, The Weekend) were really, really talented but I offered something completely separate. Just like how they offer something completely separate amongst themselves. So it’s more so making that statement like, ‘Yo this is the difference and it needs to be seen right now.”’

With his latest project release Welcome to the Wildfire, K. Forest wants people to take away a new side of him. “Who they thought they knew coming up from 2015 until now is no longer in existence. They’re getting a whole new person right now, you know? They’re getting a whole new mindset, a whole new everything. So that’s what I want them to take away. Like go into this with an open mind and an open heart and be able to receive the message that I’m portraying in this music. It’s a lot of self reflection, a lot of personal reflection as well,” he shares. The artist explains that this project came at a divine time when Forest knew that he had mastered himself. “When you’re creating a full length album you need to understand your journey, you need to understand the path you’re on and you need to understand the next steps. I think there were a lot of things that were unclear to me at the time, which in hindsight reflected on me not, for 3 years, putting out another album. So it’s like now naturally I’m in that next area. That next step. I’m ready now to give people this part of me.”

Fuego (which is the new Alias that K. Forest has taken for this new era) says that his favourite part of this new album is the intro. “It just came in with a bang, just with no regards for anything. I’m here to speak volumes on that one. It’s just different – that song the beat, the beat structure, the lyrics on it, the soundscape, it’s an anthem,” he concludes. As lead singles on the project, K. Forest released “Summer We Never Had” and “Bad Neighbors” both of which had a timely sentiment behind them. “We didn’t have much of a summer obviously with Covid going on, and I know how hard it is right now to be in a position where you want to do things and see people that you care about and you can’t do that. So it’s kinda’ revisiting our privilege at one point and what we did have. That was important, and I also needed to share where I was at mentally. So that’s where ‘Bad Neighbors’ came about. I needed to share where I was at, how it affected my mental process up until this point, and just where I’m at.”

At this point in his career, K. Forest concludes by saying he is no longer concerned with being overlooked. “I feel like I’ve done my job. I feel like who heard it is who needed to hear it. I think after I release it, if it’s touched people I feel like it’s done. I feel like once I hear one or two people say this touched me or this changed my life I think that’s it for me, I’m good.”

Stream K. Forest’s new project, Welcome to the Wildfire, below and follow the artist on Instagram to keep up with all coming releases.